It’s true if we call Iran the land of thousands of stories, you can just close your eyes and put your finger on each city of Iran and no doubt you have many historical and cultural sites to visit.  Takht-e-Suleyman is one of the exciting world heritage sites of UNESCO, since July 2003. Located in the northwest of Iran and situated in the volcanic mountain region. If you are going to visit Iran and have a trip to the North West, of course, it will pass ZANJAN city, the small city of Iran with a big history. This citadel includes the remains of a ZOROASTRIAN FIRE TEMPLE (OLDEST RELIGION OF PERSIA) built during the SASANY period (224-651 AD). The temple housed one of the three Royal Fires that Sassanid rulers humbled themselves. Enjoy your vacation with our best  Iran tours and hospitality.

We, Gapatour, one of the oldest and professional Iran tour operators, provide vacation packages to Iran, which trips are born out of a desire to share authentic travel experiences. We provide tailor-made journeys beside limited small group tours, designed to your interests, tastes, and budget.

West Azerbaijan and 45 km northeast of Takab is where Takht-e Soleiman is located. This ancient city was inhabited by various tribes such as the Medes, Achaemenids, Parthians, Sassanians, and Mongols. Takht-e-Solomon shone through the ages at the height of prosperity and civilization. Nowadays, there is no city in Azerbaijan, "one head blown, one with dirt". One of the places that is thought to be Zoroastrian's birthplace is Shiz. However, not all researchers agree.

Learn about the historic Solomon's Fortress

Takht-e Solomon's historic castle is one of the world's monuments. It is a remnant of the Sassanid Period, consisting of various sections such as Azar Gosheb Fire Temple, King's and Warriors Fire Temple, Ivan Khosrow Temple, Anahita Temple, small fireplaces, and fortified gates and walls.

Persepolis during the Sassanid era

During Ardashir I and after him, there was a tendency to eliminate the history and role of the Parthians in all matters. The difference between the Sassanid and Parthian can be described as follows:

The Sassanians sought to strengthen central government and fight non-Zoroastrian religions. It declared itself obliged to preserve the ancient religion of the country and its verses and idioms. In Avesta, "Eryanim Waje" was mentioned as the birthplace of Zoroastrians, who felt a desire to relocate from Ray to Azerbaijan during the Sassanid era. Because Ray had long been a prominent part of the Parthian dynasty, such as Nisa, of the Sassanid towns of the famous Mehran dynasty in Thiol. Azerbaijan was considered as one of the places where the Azar-e-Ghasb fire was one of the largest in the Sassanid era and close to the Sasanian capital Tisphon. Formerly believed to be the birthplace of Zoroastrianism, the Irianam Vejjeh was transferred to Azerbaijan and renamed Iran Vijay. The first component of this sacred word could have been the best possible name for the Sassanid unified land. This was the first component in ancient Iranian Aryaman aryānem and in the Avestan language aryānem. It was derived from the ancient Persian form of the Aryan Parthian period, but the Sassanians were more concerned with Avesta.

What do we see in Takht-e-Solomon?

All of Solomon's traces of art form within an oval fence and wall, surrounded by a vast plain. The outer fence is made of carcass stones of various dimensions, 5 meters thick, 14 meters high and 1200 meters outside. The outer layer of the fence is lined with masonry and has 38 conical-shaped defense towers.

The outer wall and fence belong to the Sassanid period. In the Ilkhanid period, in addition to repairing some of the collapsed parts, a new gate was built next to the southern gate of the Sassanid era. Inside the oval fence there are two concentric squares located in the center of the south square of the lake and in the center of the north square of the fireplace. Around this square, it is a rectangular fence of approximately 250 meters long and approximately 150 meters wide and encompasses 60 circular towers. In the northwestern part of the lake and at a larger square angle, a large verandah is called Ivan Khosrow. This porch is made of red brick and mortar mortar. The porch leads to two rooms or a basin of the hexagon, dating to the Ilkhanid period. Outside of Takht-e-Solomon there is a rocky atmosphere about 300 meters long and 4 meters high in the southwestern part. This stone atmosphere is called by local people, the stone dragons.

The throne of Solomon was destroyed in the attack of the Roman emperor in 624 AD. Aga Khan, nephew of Halakokhan, who converted to Islam, built a mosque on the ruins of Throne of Solomon. The mosque was later demolished, leaving only tiles with prominent motifs and lines. Prior to Islam, Takht-e-Soleiman's ancient complex was the largest educational, religious, social and religious center for Iranians. But in the attack of Heraclius, the Roman emperor was destroyed in Iran.

From all these numbers, passing the view of the lake itself is an unforgettable experience. The color of this natural lake is very striking. The reason for its attractive color is the presence of numerous minerals. This, of course, makes it not suitable for agriculture and drinking. Get out of your head at the lake. The water of the lake, which rises from a depth of 2 meters from the ground and the sediments of this mineral have changed the lake's edge over the centuries. The lake's water temperature is about 21 degrees in summer and winter, which proves that its water comes from a very deep underground aquifer.

The Persians in the Sassanid era had three large and prominent fireplaces. The names of the fires that were kept in these fires were the one called Barzin Mehr (meaning High Love Fire), located near Neyshabur Khorasan. The second was the Yazidi fireball in Farsi, and especially the masters and loudspeakers. The third was the Azarsgaspi Fire Temple, located in Takab, Azerbaijan. The Azar Gaspis Fire Temple was special to the army and was located in a town and place called Shiz or Ganjak on Mount Ashdown.

Azarshensk means the fire of a male horse. According to Iranian legend, the reason for naming this place is narrated as follows: Keikhosrow was faced with a dark night when the Divan had opened his night magic with the opening of the fortress in Nimroz. Then a fire descended on the top of his horse and illuminated the world once again, and after the victory and the opening of the fortress avalanche, Keikhosrow, by the help of this Ahurai helicopter, set down the landing fire there and that fire and the place called the fire of the male horse Called Gishneb). This place is now called Takht-e-Solomon.

Takht Soleiman Takab was registered in 1316 by the Ministry of Culture and Art with number 318 in the list of national works of Iran. 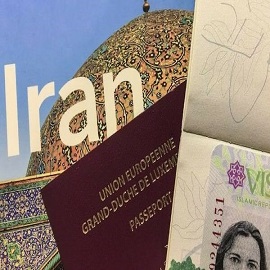 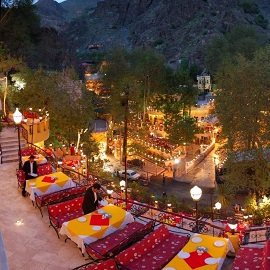 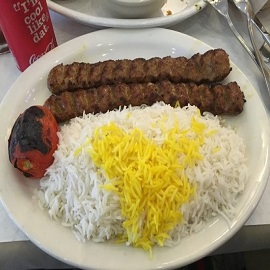 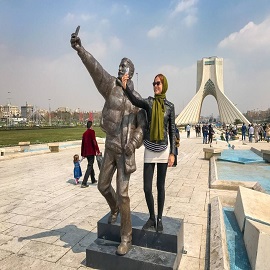 Safety of travelling to Iran