As one of the oldest centres of civilization, Kermanshah has gained great importance in the history of Archaeology. One can visit the famous rock Carvings of Bisetun, and Taq– e- Bustan, near this city. Those at Bisetun celebrate Darius’s triumph over the enemies, and those at Taq–e –Bustan mark the revival of rock – sculpture in Sassanid time. In your travel to Kermanshah don’t forget to pay a visit to the Anahita temple and Zagros Paleolithic museum too. Kermanshah city is the capital of Kermanshah province and has the most Kurdish citizens of Iran. This city is full of historical and natural sites aging back to the Achaemenid dynasty.

Kermanshah is also famous for its delicious and beautiful souvenirs. In Kermanshah you can try sweets like Beji, Qavoot, Kaak, sugar sweet and special local breads like Date bread, rice bread, Kermanshahi oil bread and even some fabulous extra delicious foods that are even served in other cities as the souvenir of Kermanshah like:  Khoresh-e Khalal Badam (an stew dish with sliced almond), Kermanshahi Kabab, Ash-e Abbas Ali, Tarkhineh, Sib Polo (the combination of stirred apple and Iranian rice), and Kermanshahi Abgoosht.

Apart from the edible souvenirs of Kermanshah, this city is also famous for its high-quality handicrafts. In the local Bazaar of Kermanshah, you can buy Kilim (a special kind of woven carpet), Giveh (local colorful shoes of Kermanshah), Jajim, Moji (another special kind of Iranian carpets), and as Kermanshah is the city of music and vibes you can fall all different kinds of local musical instruments.

There is a lot more about Kermanshah that would amaze you in so many ways, follow us in this article to find out more.

This historic city has always been one of the most important destinations in Iran tours for tourists because of its beautiful and spectacular places.

Where to go in Kermanshah 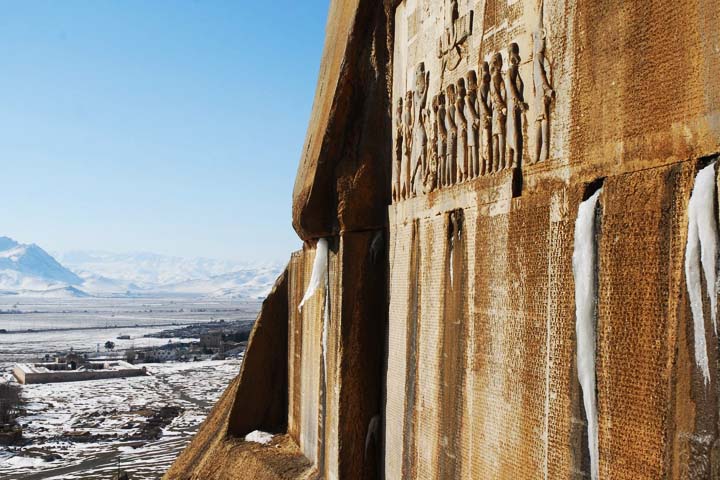 Taq– e- Bustan, dates back to 1700 years ago and was built in the Sassanid era. Taq-e-Bustan is one of the twenty historical structures that has survived from the Sassanid era. Being in the jungle and beside Zagros Mountains, Taq– e- Bustan represented the coronation of Ardeshir the second and Shapur the third. Aside from the historical value of Taq– e- Bustan, you can enjoy the perfect weather and rest beside the water under the green trees in a mountainous area. 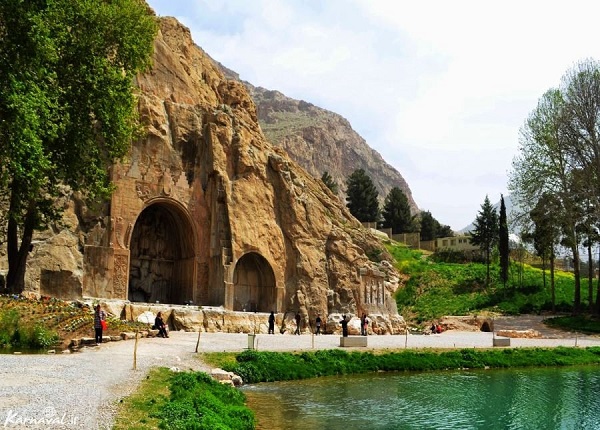 Zagros Paleolithic museum is the main museum in Kermanshah and consists of some very important stone tools and animal fossil bones aging back to 1,000,000 years ago.

One of the most beautiful and mystical sights of Iran is the Anahita temple. Anahita is an Iranian goddess, worshipped by Zoroaster and Ahura Mazda.she has the control of the water and because of her power, Zoroaster gave her his Farahvar (Farahvar is now the symbol of Zoroastrianism) to protect. Don’t forget to visit the Anahita temple on your Iran travel. 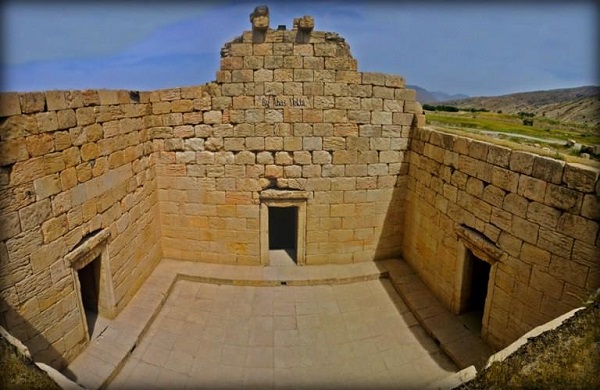 Travel to Kermanshah with Gapa Tour

As you read Kermanshah has many valuable historical sights and amazing souvenirs. In order to visit this fascinating city we recommend you to travel on a tour so that an English speaking travel guide will accompany you and help you enjoy your trip to Iran the best way you can.

Gapa Tour Company will provide you with all the services you need to experience your memorable trip. Don't waste your precious time in Kermanshah for finding the visiting sites or hotels or shops.just leave everything to us we will make this trip the best trip you ever had.

In our  Iran cultural tours, we have two tours passing Kermanshah and taking you its fabulous and fascinating sites. For more information go to our tours page.

Kermanshah is a part of Iran’s history. Kermanshah is located in the center of the province and has a temperate climate. Kermanshah is one of the ancient cities of Iran and it is said that Tahmores Divband, a mythical ruler of the Pishdadian had constructed it. Some attribute its constructions to Bahram Sassanid. During the reign of Qobad I and Anushirvan Sassanid, Kermanshah was at the peak of its glory. But when the Arabs attacked Kermanshah, it suffered great damage.

Concurrent with the Afghan attack and the fall of Isfahan, Kermanshah was destroyed due to the Ottoman invasion. But from the beginning of the 11th century AH, it gained its power and Glory back again. 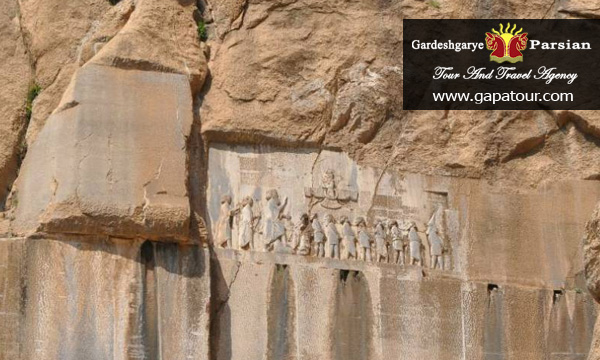 Kermanshah city is the capital of Kermanshah province and is located in the Middle Western part of Iran. With the population of 822,921, Kermanshah has the largest number of Kurd citizens in Iran.being near the Zagros Mountains, Kermanshah has a moderate and mountainous climate.