The landscape of Iran is diverse, providing a range of activities from hiking and skiing in the Alborz mountains, to beach holidays by the Persian Gulf and the Caspian Sea. Over the next five years a number of tourism-friendly infrastructure projects will be undertaken on the Persian Gulf island of Kish, which at present attracts around 1m visitors per year, the majority of whom are Iranian.

Before the Iranian revolution and the subsequent Iran–Iraq War, tourism was characterized by significant numbers of visitors traveling to Iran for its diverse attractions, boasting cultural splendoursand a diverse and beautiful landscape suitable for a range of activities. Tourism declined dramatically during the Iran–Iraq War in the 1980s.

Since the Iranian revolution in 1979, the majority of visitors to Iran have been religious pilgrims and businesspeople. Official figures do not distinguish between those travelling to Iran for business and those coming for pleasure, and they also include a large number of diaspora Iranians returning to visit their families in Iran or making pilgrimages to holy Shia sites near Mashhad and elsewhere. Domestic tourism in Iran is one of the largest in the world. Despite the international tensions, the government continues to project strong rises in visitor numbers and tourism revenue over the forecast period, and to talk of projects to build an additional 100 hotels, for example, to expand its currently limited stock.In 2011, the number of foreign tourists in Iran reached 3 million and 2015 more than 6 million. The strong devaluation of the Iranian Rial since early 2012 is also a positive element for tourism in Iran.

The official religion of Iran is the Shiite branch of Islam, which is followed by more than 95 percent of Iranian population. About 4 percent of Iranian population is Sunni Muslim . it’s worth mentioning that many Christians, Jews and Zoroastrians live freely in Iran. Language The national language of Iran is Persian (Farsi) & the main foreign language spoken by Iranian is English. A few of the more frequently used phrases are: Salaam Hello Haale Shoma Khoobe? How are you? Khaste Nabaashid May you not be tired (a polite greeting) Khahesh MikonamPlease Befarma-id A polite phrase, meaning “after you”, “your turn” Merci Thank you Motshakeram Thank you Khoda Hafez Good-bye Iranians are a very polite people, and appreciate formal courtesy (in Persian “ta’arof“). Food and Drink At its best Iranian cuisine is very good indeed, with its emphasis on the freshest ingredients, especially vegetables and fruit. The Iranian diet is heavily based on rice, bread, fresh vegetables, herbs, fruit – and meat. Iranian bread is one of the highlights, and is always fresh; it can be bought in a bakery for between 500 and 1000 rials. Iranian long-grained rice, grown in the Caspian region, is superb.

The comest main dish in Iran is kebab; this is served in most eating-houses. It is good, either beef or chicken, but it is possible to have too many. When served with rice it is called Chelo Kebab. Dishes that are well worth trying are: Fesenjan: a stew of duck, chicken or beef made with ground walnuts and pomegranate juice Ghorme Sabzi: a stew with lamb or veal with spinach and other herbs, beans anddried les. Abgoosht: a thick “soup” with lamb, lentils and potatoes served in a special container. The soup is poured out into a bowl and the meat and vegetables are pounded. Usually eaten with bread as a main course. Baghali Pulo: rice mixed with broad beans and dill with either veal, lamb, chicken or fish. Tea, drunk without milk, could be said to be the national drink. Doogh (a yoghurt drink usually served with meals) makes a pleasant change from other soft drinks, while non-alcoholic beer is usually available. Alcohol is strictly forbidden. Restaurants The best Iranian food is usually found in Iranian homes. However there is a large number of restaurants serving good Iranian food. Where there is music. A sample of recommended restaurants is given in below.

Pizzas – often of good quality – and hamburgers are widely available. There are numbers of restaurants serving western food, none of them of particular quality. There is a good, but expensive (by Tehran prices) Japanese restaurant the soon restaurant provides some Chinese, Malaysian, Thai and Japanese food . Handicrafts Handicrafts, in Iran, have had an especial position among people. Making handicrafts has begun from many years ago. We can divide the life of handicrafts in three parts. The first part in which people pay attention a lot to make different handicrafts and try to improve it in all fields, but in the second part the youths preferred to use new and modern things so they did not interest in those traditional things. Now, in these days, which is the third part of handicrafts’ life, Iranians try to protect this heritage which has remained from our ancestors. This is worth mentioning that almost each locality has an especial handicraft. For example, pottery of Hamadan is well-known, but other cities which located just around this city have many other handicrafts. Sometimes a certain handicraft is made in different places and localities but even in this case, each locality makes it in its own style e.g. Carpet. As you know Iranian carpets are so famous all over the world but the carpet of each region is different from the other one and also on the base of its place of woven its name changes because of the different style and design of weaving e.g. Carpet of Kashan, Kerman and Isfahan.

Gelims & Gabbas are also the other kinds of carpets, which have been woven in Iran. The designs and colors of any kind of carpets are so delight and lively that make you think outdoors have come indoors. Each handicraft shows the art, feeling and soul of its maker and also each one of them has a long story behind itself. Dress & what to wear In urban societies formal dresses are worn but villagers are covered in different way. Villagers have their own traditional cloths that are made quite beautiful by bright & lovely colors which are used in their weaving and also have a great variety on the base of locality. In Iran, men and women should wear their own especial cloths. Men wear long or short-sleeved shirt with a trouser. Tourists can also put on a comfortable dress like that, but it is not appropriate to wear shorts.

Rial is the Iran’s currency. Tourists can exchange their money. The easiest type of money for exchanging is American Dollar. There is some problem with traveling check so for facing no problem in exchanging it is better to bring your money in cash.

Annual Holidays: The official weekend holiday in Iran is Friday. Iranian religious holidays are based on lunar system while the Persian calendar is based on Solar system. Religious holidays are subject to change depending upon the official sighting of the moon. Generally in the below-mentioned banking holidays which are mostly religious, all the historical sites and museums are not working. 2012 14 January (Arba’in) 22 January (Demise of Prophet) 4-5 June (Demise of Imam Khomeini) 9 August (Martyrdom of Imam Ali) 12 September(Martyrdom of Imam Jafar) 23-24 November (Tasooa and Ashoora)

Iran is one of the most ancient countries of the Earth planet, so It has a great civilization throughout the years, so It is interesting to mention some spectacular historical cities & remains ,glorious mountains & landscapes. The unique geopolitical location of Iran has enabled various forms of culture to interact. Thousands of monuments & picturesque attractions make Iran a hot tourism spot. Iran is the cradle of most religions. It has many religious attractions. Holy shrine of Imam Reza in Mashad ,Stepanus in Jolfa & vank in Isfahan would be mentioned. Best of all Iranian people are extremely hospitable and warm hearted ,so they will always make you feel welcome . Climate The northern coastal region of Iran is covered with dense forests while in the center part the deserts provide you a tranquilizing silence. Northern & southern coasts with their different climates mild & humid in the Caspian region but warm & humid in the southern shores at one side, and cold and humid north-western & cold and dry north-eastern areas at the other side have made it more wonderful. For this complexity in climate, Iran is famed for having 4 distinct seasons at the same time, so one can go skiing in the northern mountains and swimming in the southern waters in the same season. Plant and animal life is of great variety in Iran. Wild life includes leopards, bears, ibex, wild ass, and wild boars. Studies have revealed the presence of a remarkably wide variety of reptiles like crocodiles and turtles. Some 200 varieties of fish live in Persian Gulf. Sturgeon is one of 30 species found in the Caspian Sea. Caviar-with no doubt many Asian and European people love it – come to hand of some special kinds of fish which live just in this sea.

Cultural Life Iran enjoys a wide variety of cultural style of people’ life. There are several traditions in Iran that NowRuz is one of the most important of them. Iranian people celebrate the beginning of New Year that is at the beginning of spring-the most beautiful season in Iran- asNowRuz. This celebration starts from 21 st of March and continues to 13 th day of new year which has its own customs -the day for going on a pick nick in the country side. At the beginning of NowRuz Celebration and at the time of transition to new year all members of family sit around a piece of cloth called “SofrehThere are seven objects being of symbolic value on Sofreh whose name of each symbol begins with [s] sound. Therefore, this Sofreh is called “Haft Sin “(seven “s”). At the beginning of each lunar Islamic year the martyrdom of Imam Hussein, Imam Ali’son, at Kabala, Iraq, at the hands of the Umayyads, is commemorated by passion plays, called “Ta’ziyeh“. These two mentioned customs are the most important traditions that at the beginning of each new lunar and solar year perform. Population & People Iran’s population is near 70 million people. More than 50 percent of this population is the youths under 20 years old. Therefore, it is a young country. About 50 percent of Iranian are ethnic Persian and the rest of them, on the base of majority, are ethnic Azerbaijani, Kurd, Gilaki, Luri, Mazandarani, Baluch, Arab and Bakhtiarithateach of them speak in their own native languages.

Geographically, Iran is located in west Asia and borders the Caspian sea, Persian gulf, and Gulf of Oman. Its mountains have helped to shape both the political and the economic history of the country for several centuries. The mountains enclose several broad basins, on which major agricultural and urban settlements are located.With an area of 1,648,000 square kilometres (636,000 sq mi), Iran ranks eighteenth in size among the countries of the world. 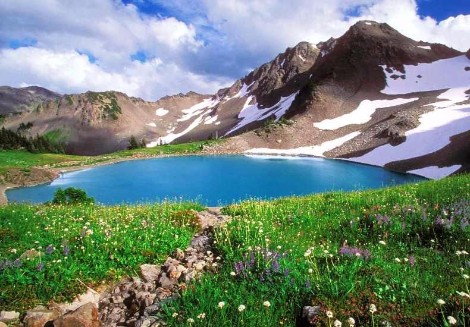