Introduction and souvenirs of Yazd

If you ask any native Iranian of the most historical city of Iran, 9 out of 10 would mention Yazd. It is not a lie to say that Yazd, with its old and original urban fabric, is the most beautiful desert city in Iran. Yazd was added to the UNESCO world heritage list, as the first historical city of Iran in 2017. Yazd attracts so many foreign and native tourists yearly. If you are interested in mind-blowing historical sights of the ancient Sassanid times, then Yazd is the best city for you.

Apart from its historical sights Yazd is also famous for its woven carpets and woolen rugs.as you know Iranian carpets have world fame, but the carpets of Yazd are the jewelry of them. Aside from the fabulous Yazd carpets, this city is famous for handicrafts like pottery and ceramics, Termeh, and Zilu. On your travel to Yazd don't forget to pay a visit to the Yazd bazaar.

Where to go in Yazd

As mentioned above Yazd is one of the most historical cities of Iran and a UNESCO world heritage site, therefore there are countless sights to visit in Yazd in your Iran travel. the most famous sights of Yazd are Alexander’s prison (also known as old jail), Zoroastrian fire temple, Amir Chakhmaq complex, Dolat Abad garden, wind tower (wind catcher), tower of silence, water museum, and coin museum.

The construction of Alexander's Prison in Yazd in the seventh century was started by a person called Zia al-Din Hassi Rati and took about 74 years to complete. After Alexander invaded Iran, on his way to Ray, today called as Yazd, he built a prison and named it Kasseh. But the change of the prisons' name into Alexander's prison could be due to the fear that the people of that time had from Alexander. It seems that this prison was the first building built in Yazd on the orders of Alexander. Today it is used as a school.

The Zoroastrian Fire Temple, also known as Yazd Behram Ateshkadeh, is a temple to the west of Yazd in Iran. A fire temple in Zoroastrianism is the place of worship for Zoroastrians. It is said to be Iran’s only temple housing Atash Bahram.  It was built in 1934 and enshrines the Atash Bahram, meaning “Victorious Fire”. It is one of the nine Atash Behrams, the only one of the highest grade fire in Iran where Zoroastrians have practiced their religion since 400 BC; the other eight Atash Behrams are in India. The fire inside is said to have been burning since about 470 AD which is visible through a window from the entrance hall. The flame was transferred to Ardakan in 1174, then to Yazd in 1474 and to its present site in 1940. Above the entrance of this building, there is a symbolic bird-man which is the symbol of Zoroaster.

Amir Chakhmaq Square is one of the most beautiful architectural and tiling works of the ninth century AH. This square belongs to the Timurid period, which was also famous in the Safavid era. In the time of Shah Abbas, some of these works have been revived. The Amirkhmaq complex in Yazd consists of a market, a tekyeh, a mosque, and two water depots. Amir Chakhmaq tekyeh was registered in 1330 AH and the mosque Amir Chakhmaq in 1341 on the national list. Amir Chqmaq Square is one of the most significant historical and tourism collections in Yazd. 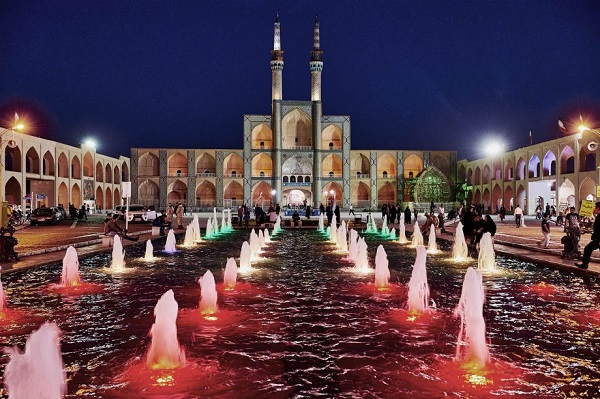 Dolatabad Garden in Yazd ages back to the Afsharid time. Dolatabad Garden was built by Mohammad Taqi Khan Bafghi, known as "Khan” for living. Being a UNESCO world heritage site along with eight other gardens under the name of Persian Garden, it has the highest adobe wind tower in the world with 33/8 meters height. 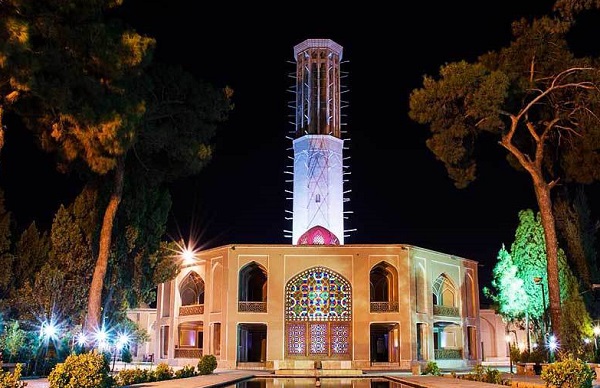 Wind Towers are the symbol of Iranian architecture but it is unknown where the first wind tower in the world was built. In the ancient times when there were no cooling systems, to survive the boiling hot weather of Yazd, architectures built Wind towers. The wind towers, are designed to be so tall so they can catch the wind and cool it, then redirect the cool stream to the houses. 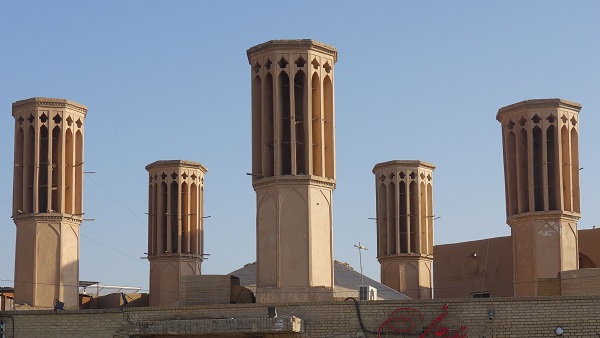 In Zoroastrian tradition they believe when someone dies, his body can be contaminated by demons so to prevent this, they don't bury the dead bodies and instead put them up the Silence Tower to be exposed to the carrion birds, usually vultures. Zoroastrian ritual exposure of the dead was first known from the writings of the 5th century BCE Herodotus, the ancient Greek historian. This tradition was taking place even until 40 years ago. The Silence Tower of Yazd might seem a little bit scary but it’s a sight no one should miss in their trip to Iran, especially if you are interested in Zoroastrism.

As most of you know Yazd is a dry city so the techniques to save water is really important. In the Yazd Water Museum, you’re going to meet the technique used in 4000 years ago to save water for the drier seasons.one of these techniques are Qanats. Qanat is an underground channel to transport water from water well to the surface. The interesting fact is that some of these methods are still functioning in Yazd.

There is so much to visit in the ancient city of Yazd, but to know the story and point behind the sights, it is best to have a tour guide accompany you in this adventure.

Gapatpur has tours to Yazd

Yazd is a must-go city in your travel to Iran, that’s why most of our Iran cultural tours pass Yazd. Gapa Tour has 7 different historical and cultural tours that five of them pass the UNESCO world heritage site city of Yazd.

In the Gapa Tour Company, we will give services not comparable with other Iran travel agencies, and our prices are unbeatable. If you want to visit Iran, we are the best company to make it happen for you.

Mystery and adventure are waiting for you; all you have to do is reach us.

Yazd is the driest major city in Iran, with an average annual rainfall of only 60 millimetres (2.4 in), and also the hottest north of the Persian Gulf coast, with summer temperatures very frequently above 40 °C (104 °F) in blazing sunshine with no humidity. Even at night the temperatures in summer are rather uncomfortable. In the winter, the days remain mild and sunny, but in the morning the thin air and low cloudiness cause very cold temperatures that can sometimes fall well below 0 °C (32 °F). 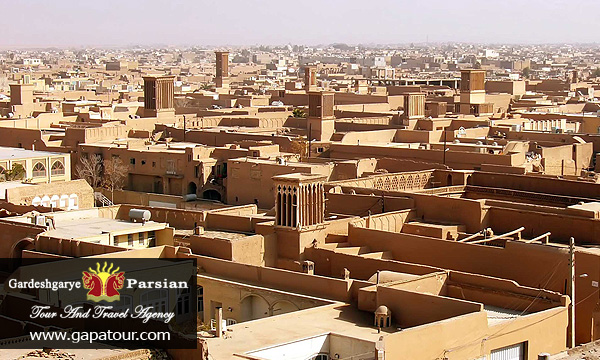 Because of generations of adaptations to its desert surroundings, Yazd is an architecturally unique city. It is also known in Iran for the high quality of its handicrafts, especially silk weaving, and its confectionary.

The city has a history of over 3,000 years, dating back to the time of the Median empire, when it was known as Ysatis (or Issatis). The present city name has however been derived from YazdegerdI, a Sassanid ruler. The city was definitely a Zoroastrian centre during Sassanid times. After the Arab Islamic conquest of Persia, many Zoroastrians fled to Yazd from neighbouring provinces.By paying a levy, Yazd remained Zoroastrian even after its conquest, and Islam only gradually became the dominant religion in the city. 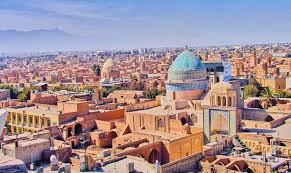